Acetylcysteine(CAS: 616-91-1) is a synthetic N-acetyl derivative and prodrug of the endogenous amino acid L-cysteine, a precursor of the antioxidant glutathione (GSH), with mucolytic, antioxidant, and potential cytoprotective, cancer-preventive, and anti-inflammatory activities. Upon administration, acetylcysteine exerts its mucolytic activity by reducing disulfide bonds in mucoproteins, resulting in liquification of mucus and reducing its viscosity. It is also used for the treatment of acetaminophen overdose as it can restore the depleted GSH reserves in the hepatocytes during the process of detoxification. The antioxidant activity is attributed to the ability of GSH to scavenge reactive oxygen species (ROS), thereby preventing ROS-mediated cell damage, decreasing oxidative stress, protecting cells against the damaging effects of free radicals and preventing apoptosis in these cells. In addition, this may inhibit tumor cell proliferation, progression and survival, in susceptible tumor cells that rely on ROS-mediated signaling for their proliferation and malignant behavior. Under certain circumstances, acetylcysteine is able to induce apoptosis in susceptible cells, including certain tumor cells, via the intrinsic mitochondria-dependent pathway but not involving endoplasmic reticulum stress. Also, acetylcysteine may also be able to degrade Notch2, thereby preventing proliferation, migration, and invasion in Notch2-overexpressing glioblastoma cells. In addition, acetylcysteine may inhibit viral stimulation by reactive oxygen intermediates, thereby producing antiviral activity in HIV patients. Acetylcysteine also possesses anti-inflammatory activity through modulation of the nuclear factor-kappa B (NF-kB) pathway and the modulation of cytokine synthesis.

Acetylcysteine, also known as N-acetylcysteine (NAC), is a modified amino acid that is used as an antidote for acetaminophen overdose to prevent hepatic injury. Acetylcysteine is a hepatoprotective agent and has not been linked to significant serum enzyme elevations during therapy or to instances of clinically apparent acute liver injury.

Acetylcysteine (also known as N-acetylcysteine or N-acetyl-L-cysteine or NAC) is primarily used as a mucolytic agent and in the management of acetaminophen poisoning. It is a derivative of cysteine with an acetyl group attached to the amino group of cysteine. NAC is essentially a prodrug that is converted to cysteine (in the intestine by the enzyme aminoacylase 1) and absorbed in the intestine into the blood stream. Cysteine is a key constituent to glutathione and hence administration of acetylcysteine replenishes glutathione stores. Acetylcysteine can also be used as a general antioxidant which can help mitigate symptoms for a variety of diseases exacerbated by reactive oxygen species (ROS). For instance, acetylcysteine is commonly used in individuals with renal impairment to prevent the precipitation of acute renal failure. Acetylcysteine has been shown to have efficacy in treating mild to moderate traumatic brain injury including ischemic brain injury, particularly in reducing neuronal losses, and also reducing cognitive and neurological symptoms when administered promptly after injury. N-acetylcysteine is now widely used in the treatment of HIV, and it has reported efficacy in chronic obstructive pulmonary disease and contrast-induced nephropathy. Acetylcysteine is also being successfully used to treat a variety of neuropsychiatric and neurodegenerative disorders including cocaine, cannabis, and smoking addictions, Alzheimer's and Parkinson's diseases, autism, compulsive and grooming disorders, schizophrenia, depression, and bipolar disorder. Recent data also shows that N-acetylcysteine inhibits muscle fatigue and can be used to enhance performance in endurance events and in exercise and endurance training. Acetylcysteine is also undergoing clinical trials as RK-0202, an oral rinse for the prevention and treatment of mucositis. It is comprised of acetylcysteine in a polymer matrix. 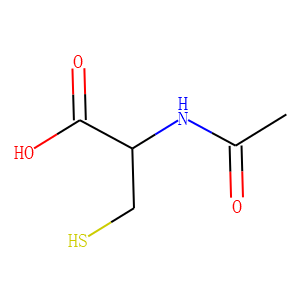