Is Caspofungin Used against Fungal Infection?

Caspofungin is a new type of echinocandin antifungal drug. As a prescription drug, it is mainly used to treat invasive candidiasis, invasive aspergillosis that is ineffective or intolerable to other treatments, and empirical treatment of suspected fungal infections in patients with neutropenia and fever. As a representative of a new class of echinocandins, caspofungin will become a research hotspot of systemic antifungal agents because of its obvious advantages of high selectivity, good antibacterial activity, high safety, less drug resistance and expiration of patent protection.

In recent years, with the advancement of medical technology, the gradual popularization of hematopoietic stem cells, solid organ transplantation and catheter intervention, and the widespread application of broad-spectrum antibiotics, immunosuppressants and chemotherapy drugs, the incidence of deep fungal infections has shown a significant upward trend. This has led to the continuous improvement of medical standards, and Candida and Aspergillus are important pathogenic sources of invasive fungal infections in fungal infection diseases, invading internal organs and hematological skeletal systems; cryptococcus neoformans, Pneumocystis carinii, Sporothrix and Histoplasma also showed strong invasive pathogenicity. The most common routes of infection for invasive fungal diseases are surgical wounds, digestive system and respiratory system, followed by urinary tract and blood. It causes great harm, poor prognosis and high mortality, and has become one of the main causes of death in critically ill patients. Systemic antifungal drugs must be used clinically.

In the treatment of invasive fungal infections, whether it is preventive treatment, empirical treatment, or target treatment, it is very important to choose a reasonable, efficient, safe and broad-spectrum drug. Antifungal drugs that kill or inhibit the growth or reproduction of fungi in clinical practice can be roughly divided into polyenes, azoles, allylamines, nucleoside analogues, echinocandins, etc. However, it is generally only applicable to superficial fungal infections, while invasive fungal infections (deep fungal infections) require systemic medication or even combination medication. The most commonly used are polyenes (amphotericin B and its liposomes, etc.), azoles (fluconazole, itraconazole and voriconazole, posaconazole, etc.) and echinocandins (caspofungin, micafungin and anidulafungin, etc.). 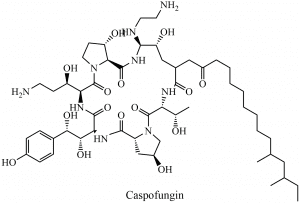 Caspofungin is a lipopeptide compound and the first echinocandin antifungal drug. It was licensed by the US FDA in 2001 for the treatment of invasive fungal infections in adults and children aged 3 months and above. As a representative of a new class of echinocandins, caspofungin possesses the unique antifungal mechanism of echinocandins.

Caspofungin has both bactericidal activities against Candida and antibacterial activity against Aspergillus. It is clinically useful for the treatment of Candida infections and candidemia, as well as invasive aspergillosis (IA) that is ineffective or intolerable to other treatments, such as amphotericin B, amphotericin B liposomes, or itraconazole. It can also be used to treat suspected fungal infections in patients with persistent febrile neutropenia. Caspofungin mainly inhibits the synthesis of the fungal cell wall by non-competitive inhibition of β- (1,3) -D-glucan synthase and does not affect mammalian cells. It is not metabolized by liver drug-metabolizing enzymes. The risk of drug-drug interaction is low and the safety is good. Evidence has shown that echinocandins have higher treatment success rates and lower patient mortality than triazoles and polyenes in patients with severe invasive Candida infections. Based on this, the ‘ Clinical Practice Guidelines for Candidiasis ‘ and the ‘ Chinese Expert Consensus on Diagnosis and Treatment of Adult Candidiasis ‘ issued by the American Society for Infectious Diseases in 2016 recommended caspofungin as the first-line treatment for invasive candidiasis (IC).

Caspofungin has a broad antibacterial spectrum, can inhibit the activity of candida and aspergillus, and can also inhibit some biphasic fungi such as dermatitis germ bacteria, rough spore fungus, and capsular cytoplasmic bacteria. It can be used clinically to treat invasive candidiasis, or invasive aspergillosis with poor efficacy or intolerance with other therapies. Clinical trials have confirmed that the efficacy of the treatment of candidiasis is similar to that of amphotericin B, but the incidence of adverse clinical reactions is lower.

Clinical trials have found that caspofungin has therapeutic effect on esophageal candidiasis in patients with HIV infection. The results showed that symptoms disappeared in 50 % of patients after the fourth day of treatment. For invasive candidiasis, the treatment efficiency of caspofungin group was 81 %, and the relative treatment efficiency of amphotericin B was 65 %. However, the incidence of adverse reactions is high in patients receiving amphotericin B treatment, and they are more prone to nephrotoxicity and hypokalemia. Studies on invasive aspergillosis have shown that the effective treatment efficiency is 45%, and 4% of patients have adverse reactions such as fever, fatigue, and nausea. Children patients have not been studied, so it is not recommended for patients under 18.

Caspofungin is mainly metabolized in the liver, so patients with moderate liver dysfunction need appropriate dose adjustment. The metabolic pathway of caspofungin is mainly chemical degradation to give an open-loop peptide complex and is hydrolyzed into amino acids and their degradation products. The volume distribution of caspofungin was 9.67 L, and about 97% of the drug bound to plasma albumin. Its plasma elimination half-life is 9-11h. 41% of the absorbed drugs appeared in the urine and 34 % were excreted from feces.

Caspofungin is a 1,3-6-D-glucan synthesis inhibitor, which affects the integrity of fungal cell walls to achieve antibacterial effects. Mammalian cells do not contain 1,3-B-D-glucan because they do not have cell walls, so they do not have side effects on the host.

The adverse reactions of caspofungin are mainly manifested as cold-like symptoms, histamine-like reactions, and gastrointestinal symptoms, of which 35 % of patients showed fever and headache. The monkey model showed that there was no effect when 1.5 mg/kg caspofungin was given, but when the dose increased to 5mg, a large area of necrosis appeared in the liver of the monkey. However, as far as the current research is concerned, there is not enough data to show that caspofungin can damage the human liver system.

A large number of clinical studies have shown that caspofungin has in vitro antibacterial activity against fluconazole-and amphotericin B-resistant Candida, there is no cross-resistance to azoles or polyenes, there is no natural resistance to Candida isolates and has better safety and tolerance. Moreover, the combination with other drugs also has a good effect. At present, caspofungin is an ideal treatment option for invasive fungal diseases.