What is Policresulen and Used for?

Policresulen is a drug against bacterial, fungal and protozoan infections. Policresulen has a broad spectrum of antibacterial activities, including gram-positive bacteria, gram-negative bacteria and certain fungi, notably against Canella, anaerobic bacteria and trichomoniasis. This product is used in organic synthesis, pharmaceutical research and development, and other scientific research fields.

What is Policresulen used for?

Policresulen is a strongly acidic substance that can promote the regeneration of necrotic tissue, reduce inflammation and promote healing, and has hemostatic and bactericidal effects. Policresulen has been used for the treatment of cervical erosion for decades. It can quickly kill a variety of bacteria, trichomonas, molds, Escherichia coli, and other pathogenic microorganisms, and has good efficacy in sterilization and hemostasis. However, it will not affect the normal squamous epithelium and restore the acidic environment of the vagina, which is not conducive to the overproduction of bacteria and the re-breeding of physiological bacteria. It quickly reduced vulvar pruritus and strained leucorrhea.

According to the analysis of the treatment results, the Policresulen is characterized by a broad spectrum, high efficiency, safety, and convenience in the treatment of various vaginitis, and has an obvious effect on the improvement of local symptoms and the reduction of vaginal secretions. It is conducive to the regeneration of necrotic tissue and the re-coverage of epithelial cells, without damage to healthy tissue, and with no adverse reactions after the medication. Is a good treatment for gynecological inflammation of the drug. Most dosage forms in clinical use today are vaginal suppositories, 36% concentrates, and gels.

In a recent study, Wu and his team found that Policresulen could act as a protease inhibitor to have an antiviral effect. The discovery of this new drug has intrigued the researchers, who further explored the mechanism of Policresulen’s action on DENV2 NS2B/NS3 proteolytic enzymes by combining affinity, thermal stability, and molecular docking experiments.

The Vitus Target of Policresulen

Dengue virus (DENV) belongs to the Flaviviridae family and is primarily spread by mosquitoes. According to a WHO report, approximately 50 to 100 million people in subtropical and tropical regions of the world are infected with DENV annually. There are four antigenically distinct viral serotypes for DENV, including DENV1, DENV2, DENV3 and DENV4, among which DENV2 is the most prevalent. Infection with any of the four serotypes will result in severe epidemic diseases, such as dengue fever (DF), and even fatal diseases, including dengue hemorrhagic fever (DHF) and dengue shock syndrome (DSS). The development of an efficient vaccine or antiviral drugs is thus extremely necessary. However, vaccine development against DENV is challenging due to antibo-dependent enhancement (ADE) effects (i.e. infection with one serotype of DENV increases the probability of infection with the other three serotypes) and complex obstacles to antiviral drug development, although many lead compounds have been reported. But there are currently no effective antiviral drugs on the market against DENV.

The DENV genome, a positive-sense single-stranded RNA, encodes a single poly-protein precursor that consists of three structural proteins (C, M, and E) and seven nonstructural proteins (NS1, NS2A, NS2B, NS3, NS4A, NS4B, and NS5). Previous studies have shown that NS3 contains two functional domains: a serine protease at the N-terminus and an RNA helicase at the C-terminus. NS2B is an essential element that acts as a co-factor to greatly enhance the activity of NS3 by 3300- to 6600-fold. As a viral protease complex, NS2B/ NS3 is mainly in charge of cleaving the viral poly-protein precursor to generate structural proteins and nonstructural proteins, and the disruption of NS2B/NS3 protease function distinctly inhibits viral replication. Therefore, the NS2B/ NS3 protease is considered an attractive target for anti-dent drug development. In fact, the treatment of human immunodeficiency virus (HIV) and hepatitis C virus (HCV) infections serve as successful precedents for targeting key viral proteases.

In this experiment, DENV2 RNA containing Rluc gene transcribed by Rlus-denv2-rep was transfected into BHK-21 cells and virus replication was monitored by detecting Renilla luciferase activity 48 hours after infection. As can be seen from Figure 1, policresulen could effectively inhibit luciferase activity in a dose-dependent manner, with IC50 of 4.99 μg/mL. This result, combined with the results of the cytotoxicity test, showed a therapeutic index (TI) of 92.07 for policresulen. 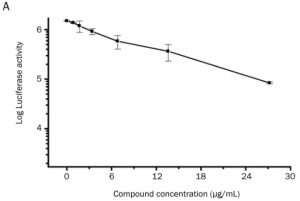 As shown in Figure 2A, a Lineweaver-Burk diagram analysis of the enzyme inhibition data showed that the policresulen competitively inhibited DENV2 NS2B/ NS3 protease, with a inhibition constant (Ki) of 0.27 μg/mL(Figure 2B). 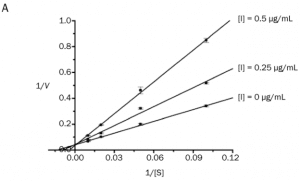 The results showed that policresulen, as a novel DENV2 NS2B/NS3 protease inhibitor, could effectively inhibit the replication of the DENV2 virus with a high therapeutic index, greatly supporting the availability and effectiveness of the drug discovery platform. The platform is expected to further expand its application in the discovery of effective inhibitors against other viruses and is expected to be used as a lead drug compound for the treatment of DENV. In addition, details of the binding of policresulen to DENV2 NS2B/NS3 proteases have been elucidated through a series of analyses based on biophysical techniques and molecular docking analyses incorporating site-specific mutations. The protease residues Gln106 and Arg133 directly interact with policresulen via hydrogen bonding, an interaction that is quite different from the previously reported inhibitor interaction, which binds to the protease’s catalytic triplet residues (His51, Asp75, and Ser135). Therefore, the newly identified binding mode of policresulen to proteases is expected to provide useful hints for the design of novel anti-denv2 NS2B/NS3 protease inhibitors.

Policresulen is a kind of organic acid with hemostatic and antibacterial activity, which is used in gynecology clinics to treat vaginitis. Recent studies have found that policresulen can also act as an NS2B/ NS3 inhibitor of DENV2, effectively inhibiting DENV2 virus replication, a finding that expands the drug’s potential pharmacological applications. As a novel DENV2 NS2B/NS3 protease inhibitor, Policresulen demonstrated effective antiviral activity. Its conformation indeed provides useful hints for the design of novel and effective anti-denV inhibitors and may serve as a potential anti-denV lead compound.