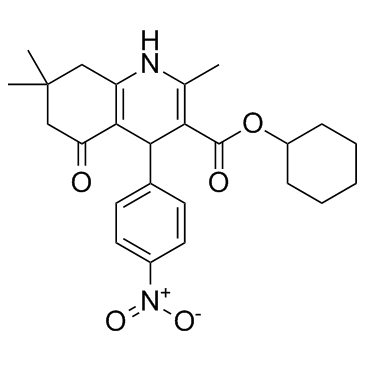 We would like to match the lowest price on market if possible.

FLI-06 is a novel potent and selective small molecule intercepting Notch signaling and the early secretory pathway (EC50 ~2.3 μM), identified by using automated microscopy to monitor the trafficking and processing of a ligand-independent Notch-GFP fusion reporter.
IC50 value: 2.3 uM (EC50) [1]
Target: Notch signaling
FLI-06 can induce accumulation of the reporter at the plasma membrane by interfering with transport in the secretory pathway. It can also disrupt the Golgi apparatus in a manner distinct from that of brefeldin A and golgicide A. FLI-06 inhibited general secretion at a step before exit from the endoplasmic reticulum (ER), which was accompanied by a tubule-to-sheet morphological transition of the ER, rendering FLI-06 the first small molecule acting at such an early stage in secretory traffic. FLI-06 is a very useful chemical probe to study the inhibition of membrane traffic at pre- ER-exit site (ERES) stages without fusion of ER-Golgi.

1:J Cell Sci. 2016 Oct 15;129(20):3868-3877. Epub 2016 Sep 1. Inhibition of cargo export at ER exit sites and the trans-Golgi network by the secretion inhibitor FLI-06.Yonemura Y,Li X,Müller K,Krämer A,Atigbire P,Mentrup T,Feuerhake T,Kroll T,Shomron O,Nohl R,Arndt HD,Hoischen C,Hemmerich P,Hirschberg K,Kaether C, PMID: 27587840 DOI: 10.1242/jcs.186163 Abstract: Export out of the endoplasmic reticulum (ER) involves the Sar1 and COPII machinery acting at ER exit sites (ERES). Whether and how cargo proteins are recruited upstream of Sar1 and COPII is unclear. Two models are conceivable, a recruitment model where cargo is actively transported through a transport factor and handed over to the Sar1 and COPII machinery in ERES, and a capture model, where cargo freely diffuses into ERES where it is captured by the Sar1 and COPII machinery. Using the novel secretion inhibitor FLI-06, we show that recruitment of the cargo VSVG to ERES is an active process upstream of Sar1 and COPII. Applying FLI-06 before concentration of VSVG in ERES completely abolishes its recruitment. In contrast, applying FLI-06 after VSVG concentration in ERES does not lead to dispersal of the concentrated VSVG, arguing that it inhibits recruitment to ERES as opposed to capture in ERES. FLI-06 also inhibits export out of the trans-Golgi network (TGN), suggesting that similar mechanisms might orchestrate cargo selection and concentration at the ER and TGN. FLI-06 does not inhibit autophagosome biogenesis and the ER-peroxisomal transport route, suggesting that these rely on different mechanisms.© 2016. Published by The Company of Biologists Ltd.

Your information is safe with us.